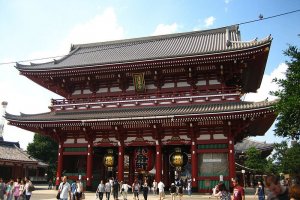 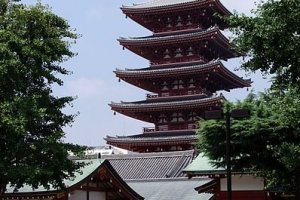 Senso-ji Temple is a popular spot for omikuji, or fortunes. These auspicious sheets are offered in a multitude of languages, enticing both Japanese and foreigners alike to see how their luck plays out. If the number you draw is less than lucky, don’t worry – simply tie up the offending fortune on the nearby wires and allow your bad karma to be spirited away.

The iconic large lantern at the Kaminarimon (Thunder Gate) entrance of Sensoji Temple has been temporarily removed for repair until April 17th (planned). Repair work usually takes place every 10 years.

In addition, open events are canceled due to COVID-19 until further notice.

The temple also shares its grounds with the Asakusa Shrine, dedicated to the three men credited with the temple’s founding. Considered one of the oldest original buildings in Tokyo, the shrine plays host to the exuberant Sanja Matsuri every May. Another popular building (and photo spot) is the five-story pagoda

A number of other festivals take place at Senso-ji throughout the year. The Kinryu-no-mai (Dragon Dance) can be enjoyed on March 18th and October 18th, when a large golden dragon on poles is paraded through the streets. Visitors on April 14th can witness the Sagi-no-mai (White Heron Dance), which features a parade of participants in both Heian-era outfits and heron costumes. In late autumn, the temple’s atmosphere grows even more exuberant during its end of the year rake fairs. Buyers come to purchase one of the many colorfully adorned tools in the hopes of raking in good fortune in the coming year.

It is arguably one of the most popular tourist destinations in the city, Senso-ji Temple – also known as Asakusa Kannon – can trace its roots back to the early 600s. In 628, two fishermen on the nearby Sumida River repeatedly brought up a golden statue of the Buddhist goddess of mercy along with their usual catch. Finally deciding not to throw the statue back to the depths of the river once more, they instead brought it to their village headman, who convinced them to build a temple in its honor. Senso-ji Temple was finished in the year 645 and quickly became a pilgrimage site.

Its popularity endured over the centuries and even continues in the present day, with most visitors making this one of their first stops in Tokyo. The road leading up to the temple, known as the Nakamise-dori or “street of inner shops”, peddles everything from lacquered chopsticks and ukiyo-e prints to cheap keychains and colorful trinkets. Cake-like ningyoyaki¸sweet treats that are served hot off the iron grill, are a popular purchase, as are warming cups of amazake in the winter months.

Nakamise-dori is the street people walk on the approach to Senso-ji. Said to have been born in the 18th century as shop keepers were granted permission to sell their wares along the way to the temple. Today, the 250-meters contains around 90 shops and sells everything from souvenirs to snacks, meals and yukata.

Kaminarimon, literally Thunder Gate, is the outer of two large entrance gates that lead to Senso-ji. The gate houses a large red lantern with a wooden carving of a dragon on the underside as well as two large statues, Fujin (god of wind) on the right and Raijin (god of thunder) on the left.

Hozomon is the inner gate, Kaminarimon being the outer, and houses many of Senso-ji’s treasures. The first story houses two large statures of Nio, the guardian deities of the Buddha; there are also three lanterns and a pair of large sandals.

The impressive five-story pagoda is easily visible as you walk along the path to Senso-ji and worth a visit—and especially worthy of some photographing. It is the second highest pagoda in Japan at 53 meters high and was built in 942 to hold Buddha’s ashes given as a goodwill to Japan from Sri Lanka.

Thanks for your review!

The Toyosu Market is a wholesale market in Tokyo, located in the Toyosu area of the Kōtō ward. There are two buildings for seafood and one for fruit..

Tokyo Solamachi is a shopping complex that makes up part of the Tokyo Skytree Town, and boasts over 300 shops and eateries featuring a wealth of goods..

Measuring in at 634 meters, the Tokyo Skytree is the largest free-standing tower in the world. It sits in the northeastern part of Tokyo, in an area known..

The Tokyo National Museum or TNM is an art museum in Ueno Park in the Taitō ward of Tokyo, Japan. It is considered the oldest national museum in Jap..

Is this your listing?

Own or manage this property?