Throughout Japan lie the remains of past battles, castles of power and the ruins of once fortified glory. Museums abound and fans of the samurai and their warrior ethic are spoiled for choice in a country that values its past.

Heroes such as Date Masamune of Sendai and Miyamoto Musashi, born in Okayama, easily take centre stage. Consider the wild rebel Taira no Masakado whose headless spirit is said to still haunt the environs of downtown Tokyo. Masakado's futile rebellion against the government over one thousand years ago still resonates with the steady stream of admirers who maintain the samurai's grave.

Ride the Hanzomon Subway Line in Tokyo and spare a thought for the man it was named after, Hattori Hanzo. The ninja leader nicknamed Demon Hanzo, who helped ensure Tokugawa Ieyasu would become ruler of Japan, eventually sought respite from a life of warfare, built a small temple in Tokyo and lived out his life as a Buddhist monk.

The almost glamorous and romantic tale of unwavering loyalty and honour surrounding the 47 ronin is still alive in Tokyo today. Forsaking their lives for the warrior code of justice, the 47 men - and boys - succeeded in exacting vengeance for their lord, earning themselves an exalted place in the pantheon of Japanese legends.

With the modern world fast taking replacing the collapsing feudal system, Kondo Isami was a master swordsman who found himself on the wrong side of history. Sworn to protect the shogun and root out Imperial support, Kondo found himself in a battle he could not win and eventually succumbed to Imperial justice in Tokyo.

Despite being a national war hero, the honourable and erudite general Nogi Maresuke would be forever haunted by the loss of his men's lives. Seeking atonement for their loss, the general finally had his desire come true. Upon the passing of his master, the Emperor Meiji, the noble general and his wife Shizuko, followed him into the unknown, a statement of conviction in a time of change.

It's no difficult thing to be amazed by modern Tokyo. Dig a little deeper though and you will find that one of the world's great metropolises is a city filled with hidden tales of the nation's warrior past.

A Japanese Permanent Resident, I have over 300 published articles on Japan as well as 5 English language books written in a traditional Japanese style. I happen enjoy writing. Funny that...I'm also the Regional Partner for Tokyo, Japan's never ending capital, so if you've anything to say about Tokyo - or Japan in general - don't be shy and contact with me via sleiman.azizi@japantravel.com 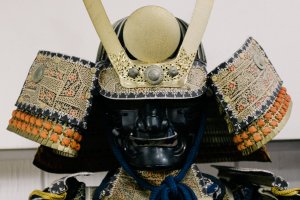 Questions about this Blog?